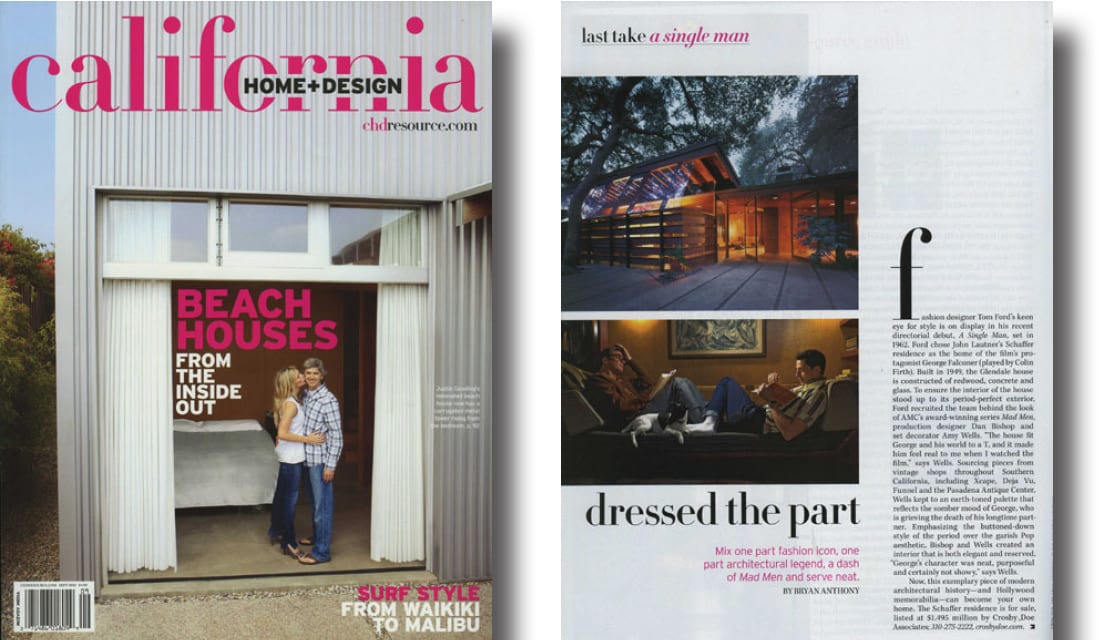 Dressed the Part by Bryan Anthony Mix one part fashion icon, one part architectural legend, a dash of Mad Men and serve neat.

Fashion designer Tom Ford’s keen eye for style is on display in his recent directorial debut. A Single Man, set in 1962. Ford chose John Lautner’s Schaffer residence as the home of the film’s protagonist George Falconer (played by Colin Firth). Built in 1949, the Glendale house is constructed of redwood, concrete and glass. To ensure the interior of the house stood up to its period-perfect exterior, Ford recruited the team behind the look of AMC’s award-winning series Mad Men, production designer Dan Bishop and set decorator Amy Wells.

‘This house fit George and his world to a T, and it made him feel real to me when I watch the film,’ says Wells. Sourcing pieces from vintage shops throughout Southern California, including Xcape, Deja-Vu, Funnel and the Pasadena Antique Center, Wells kept to an earth-toned palette that reflects the somber mood of George, who is grieving the death of his longtime partner. Emphasizing the buttoned-down style of the period over the garish Pop aesthetic, Bishop and Wells created an interior that is both elegant and reserved. ‘George’s character was neat, purposeful and certainly not showy,’ says Wells.

Now this exemplary piece of modern architectural history – and Hollywood memorabilia – can become your own home. The Schaffer residence is for sale, listed at $1.495 million by Crosby Doe Associates: 310-275-2222, crosby@crosbydoe.com