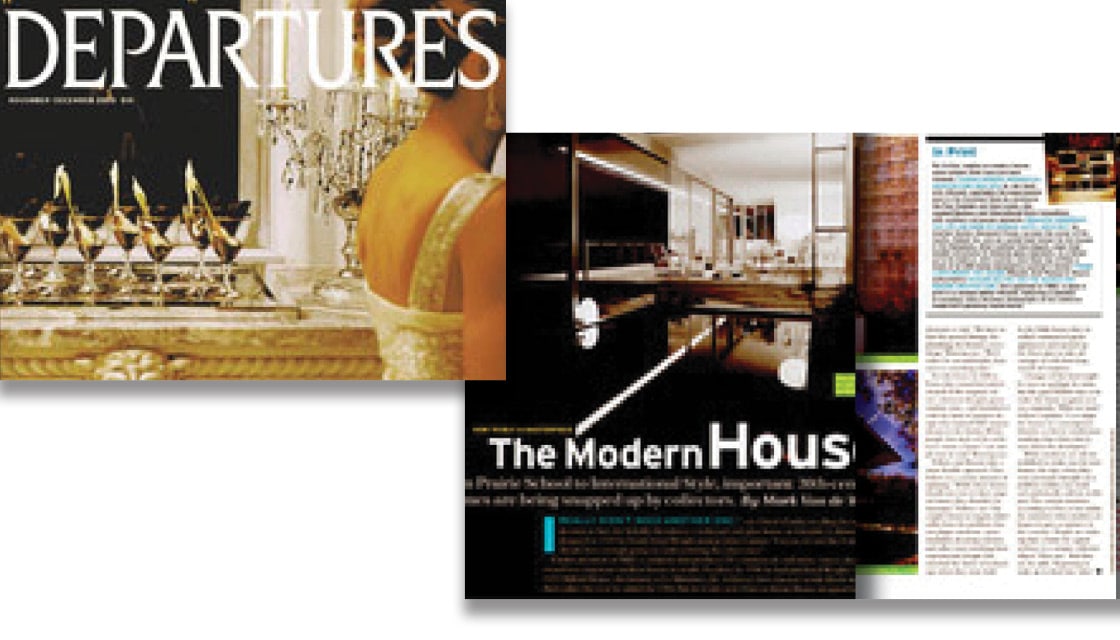 How To Buy A Masterpiece

From Prairie School to International Style, important 20th-century homes are being snapped up by collectors.

“I really didn’t need another one,” says David Zander, recalling his recent decision to buy the Schaffer Residence, a redwood-and-glass house in Glendale, California. Designed in 1949 by Frank Lloyd Wright protégé John Lautner. “I mean, it’s not like I didn’t already have enough going on with restoring the other ones.”

Zander, president of MJZ, a company that produces TV commercials and music videos, already owned two important modern homes in nearby Pasadena. In 1996 he had purchased Wright’s striking 1923 Millard House, also known as La Miniatura, the architect’s first concrete textile-block structure. And earlier this year he added the 1906 Arts & Crafts-style Duncan-Irwin House, designed by Greene & Greene, But Crosby Doe-whose firm, Crosby Doe Associates, specializes in architecturally significant properties-told Zander he should see the Lautner. “Right away,” Zander says “I knew I had to have it.”

An architecture enthusiast since college, Zander commissioned British minimalist John Pawson to design a house for him in the mid-nineties but scrapped those plans after seeing La Miniatura. Since then his interest has evolved into a life-changing passion. “These places demand respect,” says Zander, who talks about architecture with a convert’s zeal. “They just ruin you for anything else. Once you experience how intelligently designed they are, how much integrity they have, you can’t live any other way.”

From low-pitched Prairie houses to deceptively simple Midcentury Modern glass-and-concrete Case Study homes to experimental, organic seventies designs, modern residences are attracting growing numbers of serious buyers. In addition to the cachet of owning a piece of architectural history, there is the appeal of thoughtfully designed spaces with modern innovations such as steel-and-concrete structures, open floor plans, cantilevered roofs and terraces, and expanses of glass that break down barriers between interior and exterior.

Of course many great modern homes were constructed on prime real estate, in areas where land is scarce today.

“When these places were built, people had access to sites that you could never get now, that won’t be available again. They are irreplaceable,” Doe notes. This has only enhanced the sense of rarity and helped shift the way modern houses are looked at. “People are thinking of them as art pieces,” Doe says. Some buyers, like Zander, aren’t stopping at one house-they’re amassing collections.
The phenomenon isn’t entirely new. Lord Palumbo, the British real estate developer, began perhaps the first significant collection of modern homes in the sixties, acquiring examples by Wright, Le Corbusier, and Mies van der Rohe. The nineties saw a mounting wave of interest from Hollywood, focusing on Southern California, which boasts perhaps the richest concentration of modern residences in the United States. Among the major buyers was producer Joel Silver, who bought and restored Wright’s Storer House in Hollywood, as well as his Auldbrass plantation in Yamassee, Southern Carolina. Screen writer Mitch Glazer and his wife, actress Kelly Lynch, purchased Lautner’s 1950 Harvey Aluminum House in Los Angeles, along with a Neutra. Actress Courtney Cox started a collection with Lautner’s 1979 Segal Residence in Malibu.

What’s different from even a decade ago, says Doe, who has brokered numerous West Coast architectural gems is the sheer number of people collecting. Prices for a house by a brand-name architect such as Neutra, Schindler, or Wright can be two or three times higher than that for a new one of comparable square footage. Not to mention, renovating a historically important property can involve a level of financial and emotional commitment far beyond what a typical house requires. However there are more and more buyers with the means-and the desire-to pursue big-name architecture.

“When I have a good modern available,” says Sarasota, Florida real estate agent Marie Lieberman, “I get hundreds of calls for it.” Thanks in part to Paul Rudolph and a group of architects whose work came to be known as the Sarasota school, the region is dotted with first-rate modern houses. Lieberman’s clients Andrew Weaving and Ian Thomasson purchased their first Sarasota school home-built in Winter Haven in 1957 by Gene Leedy-sight unseen. Weaving, who runs the design gallery Century in Lonson’s West End, was familiar with Leedy’s won home. When the architect sent the two an e-mail saying that a place he had built nearby was available, that?s all it took.

“I told him, if it’s like yours, it’s got to be gorgeous, and I bought it over the phone.” Weaving recalls. He and Thomasson now have four Florida homes, including one by another notable Sarasota school architect, Mark Hampton. In the United Kingdom they own a 1935 house by Oliver Hill in Frinton Park Estate, a Bauhaus inspired utopian community planned for the Essex coast; it’s one of the relatively few modern houses in Britain. “There were supposed to be a hundred,” Weaving explains “but they only built thirty.”

Scott Fellows and Craig Brassam started their collection of modern houses in a more quotidian fashion: They saw a house and fell in love with it. Fellows, then a creative director at Ferragamo, and Bassam, an architect, were out for a drive in Connecticut when they found a 1955 residence in New Canaan. “It seemed like a perfect project for us,” Fellows says. “The house required a lot of work, but it had great bones.” Designed by Willis Mills, it features an elegantly severe, rectilinear structure and 14-foot-high windows with views out to wooded cliffs and a stone terrace. The location was right too-down the street from Phillip Johnson’s Glass House.

A couple years later Bassam and Fellows got jobs in Switzerland, to reinvent the Bally brand. Eager to tackle another project they bought a small villa on Lake Lugano built by a local architect. Although there’s no big name attached to it, the house is a beautifully conceived series of interlocking concrete garden walls and terraces running down a hillside and ending at the Lake’s edge. Fellows and Bassam expanded the house and turned it into a luxe modernist showcase, putting in travertine floors, walnut cabinetry, and their own furniture designs.

Now back in the States and working on a line of furniture, shoes, and luggage, they are renovating a home in Rancho Mirage, California-two converted Mies-style glass-and-steel pavilions built in 1969-70 by architect Crombie Taylor. And already they are scouting for another home in Connecticut. “We’re ready to take on something else,” Fellows says.

For some, working on a house means returning it to the state envisioned by the architect. Wright and Lautner, for example, tried to control every detail-they designed their own furniture, lighting, and textiles and teamed up with designers to achieve the desired effect. Purists like Weaving and Thomasson believe that restoring these elements is vital. “We have to find the period fittings the plumbing, the fixtures, everything,” Weaving says. “We’d rather be uncomfortable than stick in something false.”

For the house by Hill in Essex, they researched and recreated all the original colors-down to pale green window trim-and furnished it with the kind of modern designs that inspired Hill’s utopian dreams in the thirties. When people lose track of the architect’s vision, a home “can simply lose its soul”, Weaving says.

Fellows and Bassam take a more flexible approach. They believe in a certain amount of updating. “While these houses should stay true to their original intent, they shouldn’t be museums,” Fellows says. The couple’s home in Lugano didn’t suffer from the problems that can plague moderns-poor insulation, decaying concrete, and other issues resulting from experimental designs that stretched the limits of technology when they were built. In the Mills house, they installed commercial-grade appliances and opened up the floor plan to take advantage of a 40-foot-long stretch of windows.

Changes of this kind might be seen as sacrilege by some, but the goal, Fellows says, is to make the home as great as it was originally. “What we want,” Fellows explains, “is to adapt the houses to contemporary lifestyles so they’re worth more standing than when they’re torn down by developers.”

While moderns are still demolished to make way for new homes, the days when they were primarily thought of as problem-ridden, too small, and aesthetically cold are in the past. The current situation, according to Doe, is not unlike the moment when modern art began to gain acceptance in the country. “People are realizing that a home by a great architect is a unique, coherent object”, Doe says. And they are, he adds, “beginning to wake up to their true value.”

By Peter Haldeman In case you are not among her several thousand followers on social media,...
Continue reading
content copyright architectureforsale.com
+1 310.275.2222