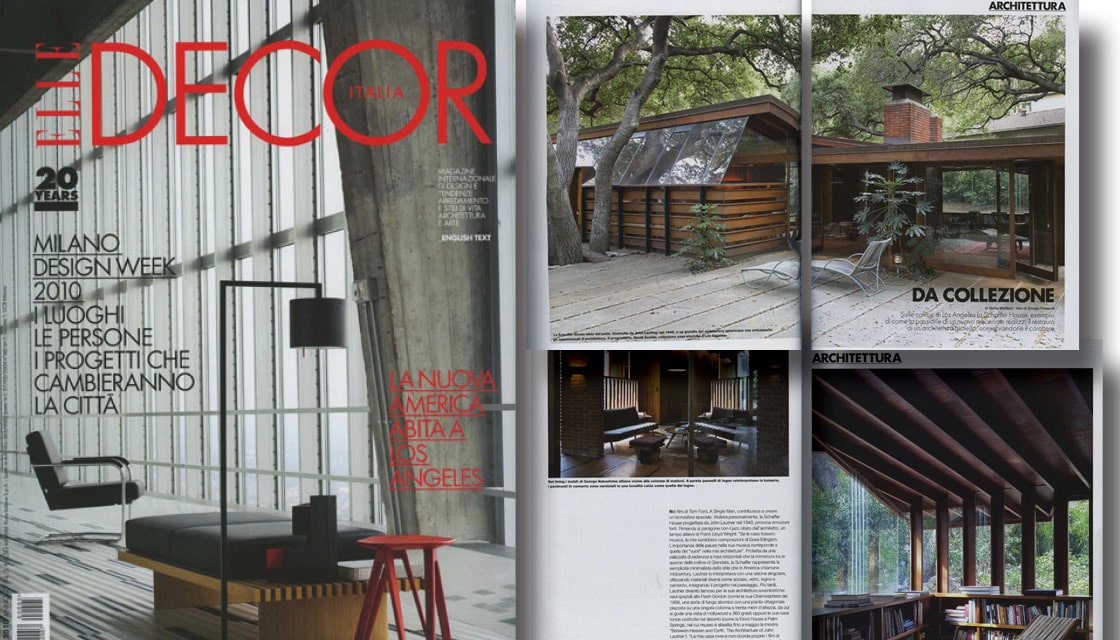 A Collector’s Item by Gloria Mattioni

Featuring ‘The Schaffer House’ – Glendale, California in the ‘Architettura’ Section

On the hills of Los Angeles stands Schaffer House, an example of how the passion of a collector can restore a building, preserve its original character and enchant all those who see it. Designed by John Lautner in 1949 amidst the oak trees of the Glendale hills, Schaffer House represents the minimalist simplicity of the style they call midcentury in America. Lautner interpreted it in his peculiar manner, using different materials such as steel, glass, wood and concrete, fully integrated with the landscape.

David Zander, owner of Schaffer House, collects designer houses like works of modern art and tells us about when he set eyes on this house for the very first time, five years ago. “I really could have done without another”. He has just became the owner of La Miniatura, one of Frank Lloyd Wright’s most famous building, and was spending millions to renovate it in line with its original design. “But when I walked into Schaffer House, I was enchanted by the staircase, by the feel”. He is referring to precious details such as the inlaid cement flooring with radiant heating, the glass walls that break down the barriers between outside and inside and bathe the living area in natural light, the exposed bricks of the columns, the wood panels that cover the walls, the pillars and architraves in metal that reinforce the wooden frame.

The house, 1,689 square feet on a total area of 11,230, has required considerable investment, not just in terms of capital, but also energy and passion. “These buildings command respect. They have to be restored while maintaining their character. Most of all, they must be understood”, explains Zander. Restoring them means bringing them back in line with the original vision of their architects, so meticulous as to often design their furnishings and lighting too. “For furniture, I chose pieces by Jean Prouve, Nagouchi or early George Nakashima. We used original photos to give the colours of times past a new lease of life, the designs of Lautner were key to the restoration of the patio”. Restoration of a building, with due regard for the original, and capable of evoking genuine emotion.
Info: www.crosbydoe.com