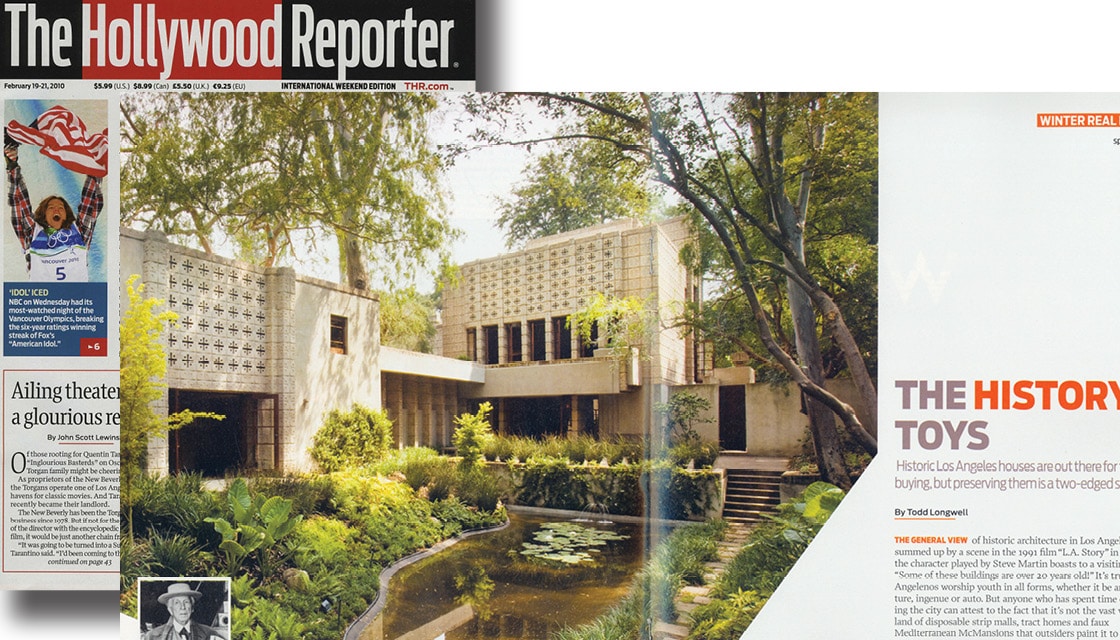 The general view of historic architecture in Los Angeles is summed up by a scene in the 1991 film “L.A. Story” in which the character played by Steve Martin boasts to a visiting Brit: “Some of these buildings are over 20 years old!” It’s true that Angelenos worship youth in all forms, whether it be architecture, ingenue or auto. But anyone who has spent time exploring the city can attest to the fact that it’s not the vast wasteland of disposable strip malls, tract homes and faux Mediterranean McMansions that outsiders paint it to be.

Nor is the city as young as she pretends.

“It was founded in 1781,” says Linda Dishman, executive director of the Los Angeles Conservancy, a group dedicated to recognizing and preserving the area’s architectural and cultural resources. “And while we don’t have many buildings from that time period, we have a lot of neighborhoods that date from the end of the 19th century and covering all of the 20th century.”

Indeed, the greater Los Angeles area is blessed with a wide variety of historically noteworthy architectural styles, including Victorian, Craftsman and period revivals (Mission, Spanish Colonial, Italian). And it has a wealth of homes designed by noted modern architects including Frank Lloyd Wright, Richard Neutra, John Lautner and Rudolf Schindler.

“In many ways, L.A. was at the forefront of ’50s architecture, because so much of our development occurred post-World War II,” Dishman notes.

While historic status can add significantly to the value of homes, it doesn’t completely insulate them from severe market downturns.

“We’ve had some remarkable architecture available for under $1 million, and a year ago I thought we wouldn’t see that again,” says Crosby Doe of Crosby Doe Associates, a Los Angeles Realtor who handles architecturally significant homes. “There are opportunities out there in today’s market that we haven’t seen in years.”

Sandra Tsing Loh definitely got more than she expected. The author and local radio personality just wanted to buy a cozy little cottage where she could nest with her two elementary-school-age daughters and regroup from a divorce. But when a deal on her dream bungalow fell through, her Realtor suggested she take a look at a two-story, 2,300-square-foot American Foursquare home in the Garfield Heights section of northwest Pasadena, built in 1907.

Although it wasn’t what she was looking for, she was taken in by its charm and quirky period touches, which include a wraparound porch, pocket doors, large double windows that open with pull-cords and an “inglenook” in the entryway with two small pews.

“It’s amazing they even accepted,” Loh says. “It was really weirdly under-market for this type of home. The house across the street sold for $1 million about three years ago, and it’s very similar, but smaller.”

Loh didn’t get a deal because it was a fixer-upper. The owners had given the property a complete restoration, refinishing the original woodwork throughout the house, remodeling the master bath and adding new custom cabinetry and black granite countertops in the kitchen, as well as new copper piping and a new foundation. And that’s not all.

“It’s got a six-burner Viking range and a wine cooler built in and the fancy whaddya-call-’em appliances,” Loh says. “It’s totally tricked out in a way that I would never think to do.”

It’s also a bit more than a true architecture connoisseur would do.

“There’s a segment of the market that relies not only on the exterior for the presentation of historic value, but also on the interior,” says Realtor Mike Deasy of Deasy Penner & Partners, who also sits on the board of the Santa Monica Conservancy. “So original cabinetry in a Schindler house would be quite valuable or original mahogany kitchens in a Craftsman house from the 1920s would be more valuable than ones that were remodeled in 1940, and again in 1960 and 1980. Of course, it’s much more expensive to restore the original cabinetry than tear it down and build new ones.”

Not everyone is able to work up that kind of passion for historical integrity, even when the home in question is a one-of-a-kind work by a noted architect. Take hair tycoon Vidal Sassoon, who purchased Neutra’s Singleton House in Bel Air (built in 1959) in 2004 and embarked on a major restoration.

“I took (the Sassoons) to the curator of Julius Schulman’s photography (at the Getty museum) and brought out about 20 pictures of the house,” Doe says. “It was in remarkable original condition, it had never been sold before. We literally begged them to leave it as it was.”

But Sassoon moved walls, enlarged rooms, added bathrooms and various other amenities to the home, nearly doubling the square footage in the process. He put it back on the market for $20 million in 2007.

“The significant alterations have made it unsellable,” Doe says bluntly. “At least it hasn’t sold for the last couple of years it’s been on the market.”

Film producer Michael LeFetra (“What We Do Is Secret,” “Bart Got a Room”) looked at the Singleton House in 2004 and decided it was too cramped for his lifestyle. Rather than alter it to suit his needs, he passed on it. During the past decade, he has purchased and meticulously restored 13 L.A.-area homes by noted modernist architects, including Schindler’s How House in Silver Lake, Lautner’s Stevens House in Malibu and Wolff House in West Hollywood, and Pierre Koenig’s Case Study No. 21 in Laurel Canyon.

“Ultimately what I’m looking for are the houses that are most in danger,” says LaFetra, who owns six homes, down from a high of nine. He keeps an eye out for properties “in neighborhoods where the land value is going to be worth more than the house” that stand a good chance being bulldozed and replaced by McMansions.

Before putting a home back on the market, he registers it as a historical property and enrolls it the Mills Act, a California program that provides a substantial reduction in property taxes on historic homes, with the idea that money saved will be used for restoration and upkeep. The tax break is significant: Two years ago, LaFetra sold architect Thornton Abell’s Rich House in Brentwood for just a bit less than $3.5 million. Because it’s registered as Mills Act property, the new owners “are only paying (taxes) as if it were a $500,000 house,” LaFetra notes.
“It has actually added to the premium value that these houses can get,” Doe says. “I assume that, soon, if that law continues on the books, that appraisers will be adding it in as an added value on a property if the property can apply.”

Although the Mills Act is a statewide program, it must be adopted by cities or counties on an individual basis.

“It gets tricky in places like Beverly Hills and Malibu, which are the two cities in L.A. County that don’t have preservation ordinances of any kind,” LaFetra says. “When you see another house for sale in Trousdale, you have to press pause for a second and think for a minute, ‘Do I really want to take this two-year project on and spend a lot of money getting it, just so the next person can come in and rip out the kitchen and the bathrooms?’ ”
That’s not to say there can’t be happy medium. When Caryn Dalessandro and her husband Jim put an addition on their 1911 Craftsman bungalow in the Jefferson Park neighborhood in Southwestern L.A. five years ago, they were careful to stay true to the look and the spirit of the original structure.

“If you walked around my house, you would not necessarily know we added on, unless you were an expert on Craftsman (homes),” Dalessandro says. “The siding continues, the windows continue in the same theme. The foundation is the same and the roofline is the same.”

Still, it wasn’t good enough for one of the preservationist-minded “neighborhood radicals.” “I asked one of them about my remodel and he said, ‘Well, I’m going to reserve my judgment,’ ” Dalessandro recalls. “So we added another bathroom. It’s the 21st century, you know? I don’t want to live like it was.”

An HPOZ “is the local designation for historic districts here that provides certain protections in the zoning code,” Dishman explains. “For the last five or six years, we’ve worked really closely with a lot of historic neighborhoods throughout the city to make them HPOZs,” including West Adams and Hancock Park.

In an HPOZ, owners of structures that are deemed to contribute to the historical significance of the area’s architecture must get approval from the City Planning Department before undertaking any exterior work to the property, from the installation of new windows to relocation or demolition. A formal application must be filed, along with detailed plans and a fee of about $300. The process can take up to 75 days. Less significant exterior work, such as routine maintenance or changes to the exterior paint color or landscaping, needs approval from the Planning Department. There is no fee, and the process only takes from three to 21 days. Pasadena and San Diego have similar HPOZ ordinances on the books.

In Hancock Park, the most recent L.A. neighborhood to receive HPOZ certification, members of the Orthodox Jewish community protested that limiting their ability to make alterations to their homes would curtail their right to freely practice their religion by restricting them from expanding homes to accommodate their large families or adding modern kosher kitchens.

Fears that HPOZ status or other forms of historic designation will restrict owners’ rights are not uncommon, but they’re usually based on secular concerns.

“Especially 10-15 years ago, people would say, ‘Oh, no. I don’t want to be historic,’ ” Doe says. “And they would go fight against it, thinking that it would decrease their property values.”

But when people are afraid of HPOZs, “It’s usually because they just don’t know what it means to be in one,” says Realtor Greg Moesser, founder and director of L.A. Classic Estates. “I’m in an escrow right now with first-time buyers who are buying a house in an HPOZ in West Hollywood. It’s got an original kitchen (from the 1920s) and they wanted to upgrade it, but they had concerns about whether the HPOZ would allow them to do it. I think we were able to alleviate their concerns when they talked to the HPOZ (administrators) and they found out, yes, you can upgrade the kitchen. As long as you’re not changing the roof line and the exterior, that’s fine.”

In spite of the occasional controversies, Dishman says that the process of creating an HPOZ tends to unite, not divide neighbors.

Of course, that’s a lot easier when property values are going up.

“Before the crash began two or three years ago, we compared houses that were just adjacent to and within the HPOZ at Crescent Heights and Pico,” Deasy says, “and indeed, over time, the homes within the historic district were getting better prices than the ones outside.”

Naturally, the definition of what is and isn’t historic changes over time. Homes built in the ’50s and ’60s that were considered tacky and dated 20 years ago are now being touted by Realtors as prime examples of midcentury modern architecture.

Does that mean that decades from now people will be people be singing the praises of Turn of the Millennium McMansions?