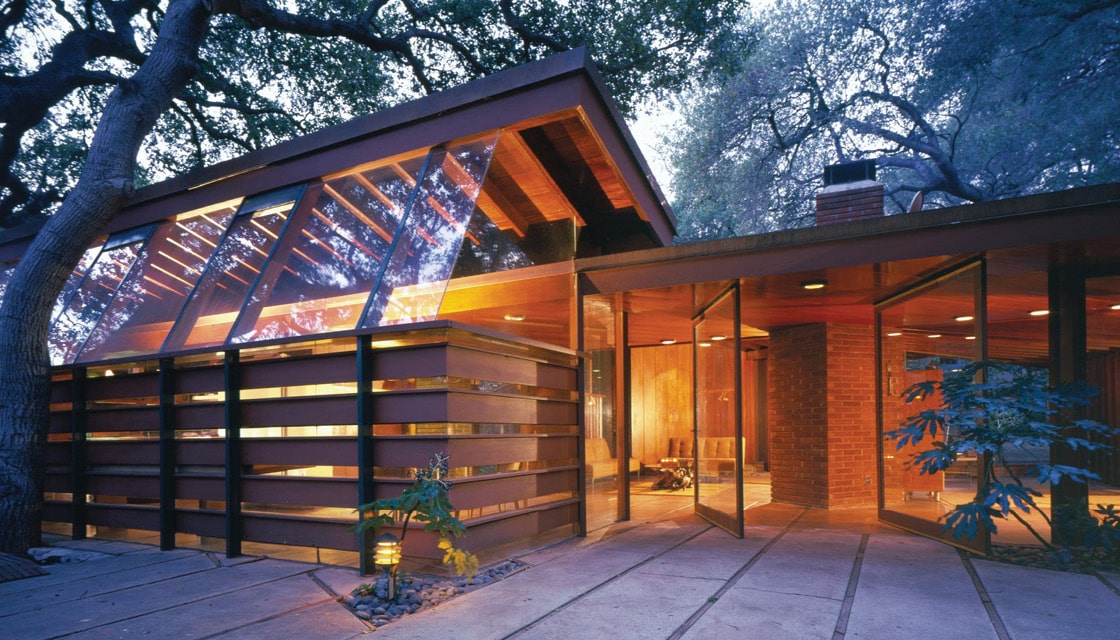 My House is your House

California discovers its architectonic heritage – modernistic domiciles are sold to the highest bidder.

“If a Picasso is worth 145 million, then this should cost around 30 or 40 million, but it is, in fact, on the market for seven and a half…

Crosby Doe, wearing rather daring sunglasses, parks his green Jaguar in front of an imposing gate in a residential street in Pasadena, 20 minutes outside of Los Angeles. Beyond the gate lays “La Miniatura” one of Frank Lloyd Wright’s masterpieces. In profile it looks like a Mayan temple lost in a jungle valley, but he even went one better when he said “that if he had had the choice of designing St. Peter’s in Rome or this not so very large house in California, he would have gone for La Miniatura”. It still has the effect of an architectural temple today with its pre-cast concrete blocks cut cross-shaped, rough beams in the interior and the dramatic fireplace in the living room. In the living room? Well yes, and in the bathroom, kitchen and garage. They are still working on the roof, of course: Wright’s houses are never really ever finished. Apart from that, the renovations are done; the work of art is ready to move into. And it’s even got cable.

In Europe and on the American East Coast the most important architects of their time build churches and palaces. In California they build houses. There are dozens of buildings that are among the most important products of 20th century architecture. They sprang up in the golden era from the twenties to the sixties, when Los Angeles was still the living Utopia for a new, sunnier concept of a city. But in contrast to European monuments, these modernistic pearls were all delivered to their owners in the Hollywood Hills, in Santa Monica or in Beverly Hills. These are homes with architectonic finesse of modesty, economical thinking and subtlety but a number of them were torn down and replaced by terracotta castles twice the size.

WHEN AN EAMES LEG SCRAPES

But that time has gone. The interest in preserving houses and making them accessible to the public has never been greater. There are collectors who specialize in them. And also museums are warming up to them. Crosby Doe, a realtor, who has been selling architectonic houses for 30 years and who in reality is their advocate and conservator, feels relieved. “Yes, capitalism is working. The houses have become so expensive that nobody buys them just to tear them down anymore.” This new inflamed interest did not come as a surprise. Since the 1990s with the end of post-modernism, mid-twentieth century design was rediscovered. When the scraping of the Eames chair leg on the kitchen floor was replaced by the twittering of the Alessi kettle, a renewed interest in mid-century architecture took off too. All variations of international style were discovered anew and became California modern; not least because of the photos of Julius Shulman, the most beguiling of them.

The enthusiasm for mid-century architecture was more like a mere fashion phenomenon that after a few seasons is replaced by a new look. The auction of the Farnsworth House designed by Mies van der Rohe proves this. The house, built in Chicago in 1951, was sold for 7.5 million dollars at Sotheby’s in 2003. In June of the previous year at Christie’s, Maison Tropicale, Jean Prouve’s prototype of a metal pre-fabricated house for colonial administrators being sent to Africa, built in the same year as the Farnsworth House, was sold for 4.97 million. This May, again at Christie’s, the Kaufmann House in Palm Springs, one of the most famous works of Richard Neutra, built in 1946, will be auctioned. The valuation is somewhere between 15 and 25 million. In 1992 after Barry Manilow had moved out and the house had stood empty for years, the present owners paid a mere 1.5 million for the house and the more than 43,000 square feet of land on which it stands.

The phenomenal price rise cannot only be attributed to the modern revival, but also to the renovation work, for which the owner researched the archives and even persuaded Shulman to enlarge an assortment of the negatives from his historical photographs of the house. When the work was completed in 1999, the house was paraded through the glossies all over the world.

For the commercial moviemaker David Zander, the restoration of such houses has become a hobby. One such house is the Schaffer Residence; a house built in 1949 by John Lautner in Glendale and is on the market for almost two million after Zander had worked on it for years. “He has done everything right and few people have so much sensitivity,” Doe rhapsodizes in this house of wood and glass cowering under the large oaks. He opens and closes delicate slats; commends the original kitchen and the cement floor. Zander’s masterwork is, however, “La Miniatura”. “It’s as if you were to renovate a medieval castle” ays Crosby Doe.

Doe respects the sellers so much, but, he cannot avoid the occasional catastrophe. Such as the Singleton Residence on Mulholland Drive, a super glamorous Neutra house with a view to the Pacific.

“The new owners have ruined it. Inside there is almost nothing left. And worst of all they think they have improved on Neutra. It’s as if someone bought a Monet and then said: I don’t like the sky here and I want more flowers there.” Although many of these houses are heritage protected with enormous tax advantages for the owner it cannot stop such things happening. “The people from the authorities come once and that’s it. It’s a joke,”says Doe.

WHERE AM I SUPPOSED TO LIVE THEN?

One reason to allow these houses be administered by institutions is to ensure that the public can gain entry. The National Trust for Historic Preservation bought the Farnsworth House at auction and they also own Philip Johnson’s Glass House. Both houses are open to visitors. Michael Govan the new director of the Los Angeles County Museum of Art (LACMA) has been considering similar projects in Los Angeles for some time. “L.A. must appreciate what its cultural heritage is made of. I have already spoken with some owners of such houses as to whether they might one day leave them to us. Paintings have already been gifted to us.”

For the museum it is unfortunately not so easy. “A painting is hung on the wall. A house has to be restored and continually maintained.” Govan is worried about raising the money so that if a gift is made, the money for maintenance is in place already. Govan has even shown interest in the house owned by Frank Gehry who, admittedly, has declined for the moment, saying, “Where am I supposed to live then?”

A model for Govan’s idea is the Austrian Museum for Applied Art’s satellite institution in Los Angeles this is the famous house that once belonged to the Austrian in exile Rudolph Schindler, who built the house on the Kings Road in West Hollywood in 1922. The Austrians also maintain a second Schindler property the Mackey Apartments used to house scholarship holders.

Now there will soon be a third – the Fitzpatrick house – that hangs precariously in the midst of wild green country above the intersection of Laurel Canyon and Mulholland Drive. Russ Leland the friendly, but rather unforthcoming owner who will say nothing more than, ?I get along, there are already some,? wants it gifted to the Austrians after he has spent a million restoring it. He has no need of the house. He lives for the time being in a house where once the great Pierre K?nig lived.

LACMA has dithered for too long.