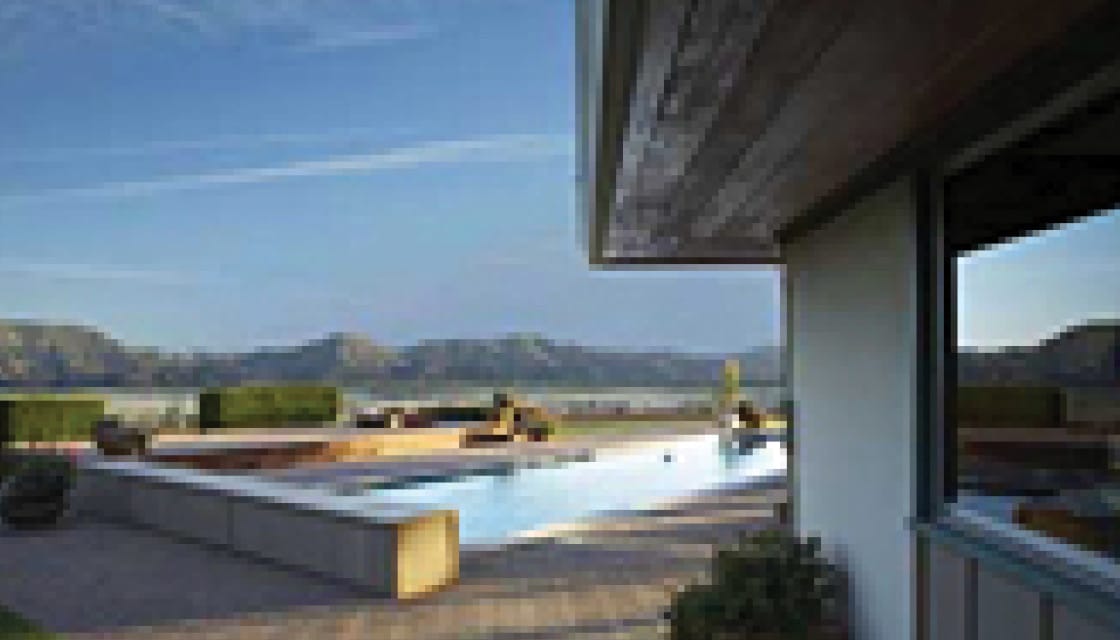 Never mind the Jean Prouve tables and Damien Hirst butterfly paintings. To really be of the moment, why not collect a John Lautner motel in Desert Hot Springs? That is the thinking behind architectureForSale.com, a website offering quality works of architecture on a national and international basis. Real estate websites are a dime a dozen, but AFS, as it is called, comes with a respectable pedigree.

The site was launched by Crosby Doe, a specialist in architectural residences for 30 years in Southern California. The boutique agency of Crosby Doe Associates is known for its architecture listings as well as its uncluttered, full-page ads for houses photographed by the likes of Julius Shulman and Tim Street-Porter. At the time that I called Doe for an interview, he was concluding the sale of a hilltop Rudolph Schindler house to New Yorker author Susan Orlean.

ArchitectureForSale.com features residential architecture from around the world, though at this point most of the structures are in Southern California. The site shows a John Lautner house located in the area of Flintridge, in close proximity to its original state, for $2,295,000. A jaw-dropping glass and steel house by Ladd & Kelsey in Malibu is listed at $5,500,000 while a mid-20th-century treasure by Chalfant Head in the rural area of Fillmore is $1,795,000. In Andover, Mass., there is a 1957 home by Marcel Breuer for only a million. In Lake Forest, Ill., a Frank Lloyd Wright house is $2,495,000. While the AFS site includes architecture of all periods, offering 19th-century mansions in Greenwich, Conn., and a Georgian property in Nova Scotia, the emphasis is decidedly modern.

Whatever the period, Doe believes that these architectural properties increase in value when they are entirely original or judiciously renovated. Doe has long believed that the best works of architecture should be classed with fine and decorative arts for collectors. The results of recent auctions support the escalating value of architectural design, with a Frank Gehry fish lamp selling for $180,000 and a Zaha Hadid table for $324,000, both well above their estimates.

Doe cites the recent sale of Pierre Koenig’s Case Study House #21 through Wright Auctions for a total of $3.1 million. There are zero comparable sales based on square footage and location. The enhanced value derived from the fact that it was a quintessential work of mid-20th-century architecture. The kitchen was renovated by Koenig himself shortly before he died but the glass and steel house was otherwise in its original condition. Doe says, “It sold as a piece of art. To me, that proclaimed what I’ve been saying for some time. That architecture has finally moved into two camps: real estate and art.”

Those camps can be hostile to one another. Doe will be the first to admit that realtors generally prefer new, remodeled and renovated and that most clients prefer it as well. “I’ve advised my clients that there are definite compromises in living in a work of architecture. But what that gives back to your soul is greater than whether or not you have a large bathroom or a big closet. It is a matter of respect”

“These properties will always be a challenge to sell. Each was designed for a specific client. Richard Neutra would sit down with a client and have a list of 100 questions: What side of the bed do you get out on? Questions about how they lived in his endeavor to create a lifestyle for a particular client that would enhance his life. It is a challenge to find an individual whose lifestyle can accept the advantages and constraints of the original concept imposed. It takes longer to sell a work of great architecture.”

Michael Govan, who left the Dia Art Foundation last year to become director of the Los Angeles County Museum of Art, boldly convinced the museum to accept the John Lautner Foundation’s long-term loan of an office designed by the architect. Commissioned from Lautner by real estate investor James F. Goldstein, the office was threatened with extinction due to renovations of its Century City high rise. Govan will use the 800-square-foot office, which has copper walls and a black slate floor, as his own and open it to visitors on weekends.

Since then, Govan has said that he will pursue architectural donations to the museum and find funds to maintain them. He told the New York Times, “In the same way that someone would donate a Picasso, we want people to think of ways to see these houses as works of art and to think about ways to preserve them.”
The trend towards treating architecture as art gained further traction last week, when Christies New York announced that it would sell a prototype Maison Tropicale by Jean Prouvé at its design auction on June 5, 2007. The house carries an impressive presale estimate of $4 million-$6 million.

Doe has long been concerned that works of architecture typically do not have the protections associated with fine art and design. “I want to talk about conservation,” he says fiercely. “There has to be a critical awareness of the importance of preserving the historic fabric of the architecture — everything the house is made of. Architecture, until now, has been primarily in the real estate camp. They value new and remodeled and redone. This has had sad results for many pieces of world-class architecture. Many people have taken the attitude — and this is pure ego if we are talking about the work of Walter Gropius, Frank Lloyd Wright, Richard Neutra, Rudolph Schindler, John Lautner and so forth — they say, “If the architect were alive today, this is what he would have done.”

“I’m appalled when people take that attitude. It’s not taken in any of the fine arts. Or even in classic cars. Any professional claiming to be an expert in the style of an architect must be aware of what it is. Most celebrated architects designed a complete expression equivalent to a fully resolved Picasso painting. We believe that anybody who claims to have credentials in the marketing and selling of architecture should celebrate these values, educate their clients and the public. Sometimes we will fail, of course. Nevertheless, we must hold the banner of preservation. Otherwise, in 100 years, there will be no historic architecture, only a pastiche of historic architecture.”

Thomas Hines, professor emeritus of history and architecture at UCLA, questions the connection to collectibles. “Architecture is different from cars and jewelry and even from painting and sculpture in that it is rooted in a particular environment and was originally designed for a particular client and set of conditions. As clients and conditions change, buildings still have to be used and cared for as environments by other people or institutions.

“Many important buildings have been saved and re-cycled, of course, as ‘museums’ or as venues for new institutional uses. It is fine for a museum such as LACMA or certain preservation organizations to acquire buildings for educational and experiential purposes. In general, however, for private individuals who just plan to amass buildings and keep them for themselves, I think it is flip — and selfish — to speak of architecture as collectible”

Doe’s office walls are adorned with framed Julius Shulman photographs of modern houses that he has sold over the years. Shulman had photographed many of these houses years before their sale but Doe recognized the graphic black-and-white images as a tribute to the purity of the structures and used them in his advertisements.

Their relationship began in 1974 with Shulman’s photographs of the Eugene Loring house, which Doe sold for $100,000. The tiny diamond was built by Neutra in 1959 and incorporates his signature floor-to-ceiling glass walls framing the view of the pool and beyond. It proved to be Doe’s epiphany. He recalls the experience of coming to understand in the most essential way what was special about a fine work of architecture.

“As I sat there doing open houses, the architecture itself was giving me something. It changed me. It was calming. I thought, “Why do I feel so good?” That absolutely is architectural power close-up, to evoke a response as a serious work of art, and it has kept me passionate after all these years.”

For 20 years, Doe pretty much had the field to himself as he developed his expertise in Southern California, considered to have one of the richest and most diverse collections of residential architecture in the country. The Mediterranean-style mansions of Wallace Neff or the elegant traditional homes of Paul Williams were always highly prized.

The modern homes designed by Pierre Koenig, Schindler, Neutra and others, however, appealed to a more rarified taste. Glass and steel houses on steep hillside lots defied the average clients’ imagination, let alone lifestyle. Yet, those houses were songs that Doe could sing and he sold them to artists and designers, lawyers and film producers.

With his partners, Doe opened offices in the Lloyd Wright studio on Doheny Drive, but business expanded and they soon had so many employees that they moved into their current location, expansive contemporary offices in a Maxwell Stark building in Beverly Hills.

With his floppy brown hair, strong eyebrows and propensity for brown suits, Doe has a professorial air. After so many years, he is as knowledgeable about the buildings of Los Angeles as an architectural historian. A founding patron of the L.A. Conservancy, he is outspoken about issues of preservation, even when his opinions might alienate potential or existing clients.

Along the way, he has trained legions of realtors, many of whom have been recruited away from his boutique agency by gargantuan operations such as Prudential or Caldwell and who now have architectural divisions modeled after Doe’s success. The Los Angeles Times real estate section is cluttered with ads offering “architectural” and “mid-century” properties that are often nothing more than tidied-up ranch houses or stucco boxes with brushed aluminum kitchen appliances.

While Crosby Doe offers homes that are not built by name architects, their reputation still rests on the many architectural properties that they do represent. In 1999, the L.A. chapter of the American Institute of Architects awarded the firm a certificate of appreciation for its years of support. The AFS operates as an extension of the agency that appeals to a population of potential clients predisposed to shopping online, especially those in Europe and Asia.

Doe notes that the site recently was used to broker the sale of Wright’s Pew house in Madison, Wisconsin by its owner. As the internet has facilitated the ability of art dealers and auction houses to offer art online, the same could well be true of architectural homes. “We have only just begun,” Doe says. “If a Picasso is sold for $140 million, why shouldn’t one of the top ten Frank Lloyd Wright houses be worth $50 million? We are now moving in that direction.”

HUNTER DROHOJOWSKA-PHILP is author of Full Bloom: The Art and Life of Georgia O’Keeffe, published by W.W. Norton.