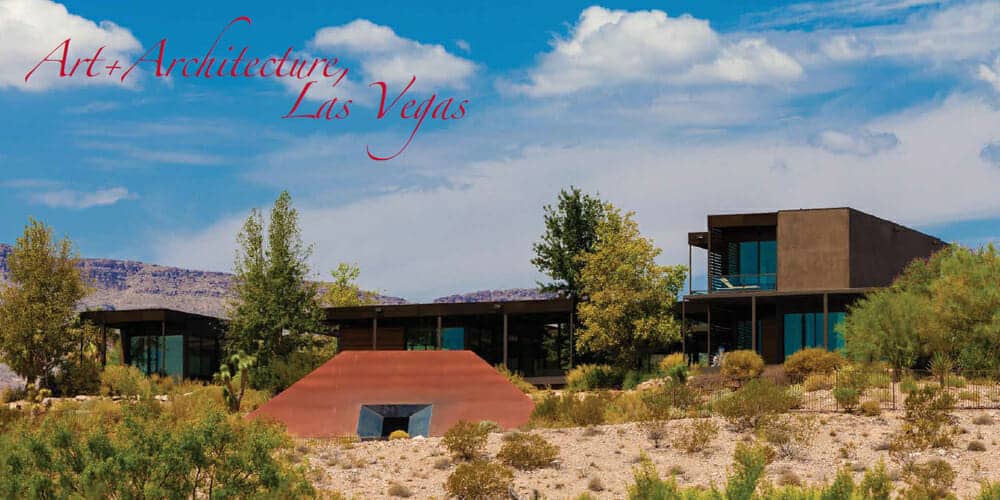 Arrowhead is a luxury estate with a radical difference. It lies on the rugged edge of a ridge west of Las Vegas, dramatic views of the mountains behind it and a panoramic vista of the ever-changing city before it. Arrowhead stands as the prototype for a new type of suburban dwelling that lies more lightly on the land, takes much less from it, and – like a model city as much as a standard residence – lays itself out on the site as a set of volumes of different scale and uses, with different sensibilities, linked and separated by a pattern of open spaces and walkways, but united around a consistent architectural language.

Marmol-Radizner’s client came to this approach slowly, starting with design studies for a modern variant of the hacienda, but gradually coming to recognize that an environmentally responsive strategy with a more open relationship between the structure and terrain and a much lighter impact on the land and its resources could prove even more satisfying. Partly as a result of his association with the artist James Turrell, the client became familiar with Marmol Radziner’s ventures into forging desert dwellings from a steel-based modular system of construction, and began to work with them on a plan that would match that system to the needs and sensibilities of a lively small family. What emerged above the rocky ledge in The Ridges Estates was a set of pavilions, some connecting and some standing free, and all linked by terraces that flow seamlessly between them, ending with a massively impressive sky-space by Turrell, perhaps his most important private commission, that closes at the edge of the site the dialogue between motion and meditation, serenity and dynamism, that marks the whole. It is an astonishingly effective model for inhabiting a dry hot climate and a rugged landscape, and one that could be modified to many different scales and needs.

Most important perhaps is the radically different approach to shelter. Here Marmol Radziner and their clients rethink shelter not as a barrier against the rough terrain of the desert, or the intensity of its light and heat, but as the means of enjoying them. The plan liberates living from the box and its boundaries in favor of an open plan, allowing the different zones for living to find different relationships to the site and its vistas, linking them both in a seamless internal flow and by a continuous system of terraces. The roofs of the enclosures turn into wide, high canopies that stretch above these connecting outdoor rooms, and shaded glass walls slide apart to make movement between indoors and out seamless, comfortable and inviting. The key to the whole scheme lies in the use of a unified construction system, fabricated offsite and assembled with a minimum of labor and resources, huge modular panels, of steel frames. Frames vary in use from ceiling to clerestory to screen to glass or solid wall and are panelled in many different materials, with glass, metal sheets, and strips or boards of wood, fitting the orientation and function of each section. But the repeated geometries of these modules and the consistent palette of colors and surfaces bring an extraordinary coherence to the whole that turns a wandering plan into a rigorously unified spatial composition. In the client’s words, “there is a discipline to the design.”

That discipline – gained through the use of a variable modular system – allowed the architects to shape a building with no fixed points of view and with many different pathways. In the ever-changing conversation between light, shadow, and structure as different aspects of the compound unfold either by moving through it or by watching the movement of the sun, there is still a steady rhythm that renders all the visual incidents satisfying. As the plan shows, interruptions in the form of water features, landscaped space, drops, and voids are as essential to this idea of an unfolding pattern as the passages one moves through. The effective result – and where the Arrowhead complex really triumphs – is in the continuity it brings between people within it and all the aspects of the space around, from the surface of the earth, its native vegetation (which the gardens of the compound simply intensify rather than contradict) to the rocky undulations of the terrain as it reaches the shelf that falls so fast at the eastern edge of the site; to the worldly vista of the Las Vegas Strip aglow at night; and finally to the passage of sunlight and the movement of the desert sky as it moves toward dusk and the appearance of the moon and stars.

This relationship is captured in a more contemplative but decisive fashion in Turrell’s Arrowhead sky-space, situated with deliberate abruptness just where that shelf falls away from the constructed tray on which the living compound sits. There, Turrell constructs a dense earth-toned pyramid whose form, tones, siting and textures are shaped to stand in contrast to the glass pavilions above it. Echoing the colors and geometries of ancient kivas and the stepped gradients of pyramids, its two connecting chambers sit right on the boundary between tamed and untamed landscape, surface, depth and sky; and its openings – one framing the sky overhead and the other the oblique moment where earth and space are joined – invite one to watch with stillness and wonder the same unfolding play between celestial and terrestrial light that the design of the everyday world behind it uncovers with such casual and lively grace.

Editor’s Note: A Marketplace for Architecture