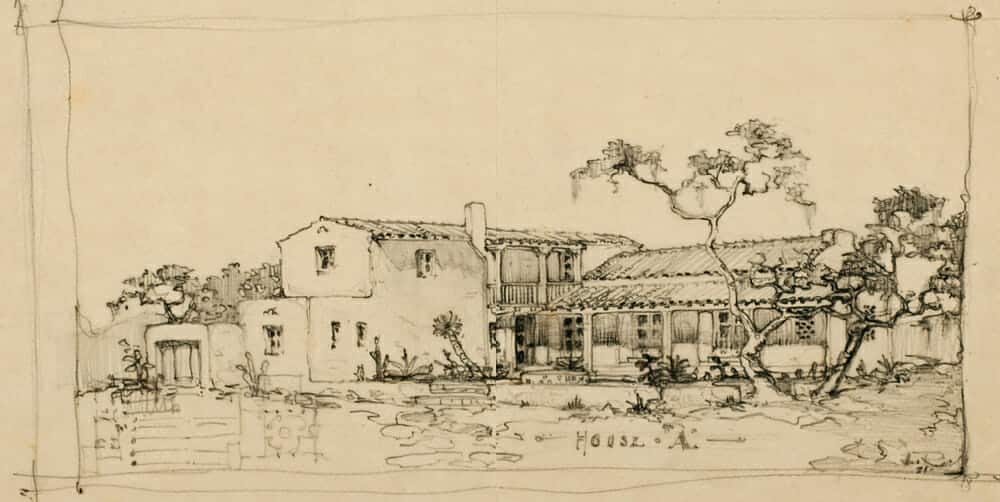 American architects in the first years of the Twentieth Century were in desperate search for an end to what Joy Wheeler Dow called “the reign of terror” wrought by the grandiose, over-wrought and bombastic taste in building of the Gilded Age, with its deference to the chateaux and palaces of Europe. Calling, like many others, for an “American Renaissance’ that could uncover a native tradition of building in which a burgeoning new nation might feel at home, Dow pleaded: “We want to belong somewhere and to something, not to be entirely cut off by ourselves as stray atoms in boundless space . . . We may not indeed have inherited the house we live in; the chances are we have not . . . but let us pretend that [we] did and that it is now ours.” California’s initial response to such calls for an authentic American way of building was to look either to the Japanese inflected Arts and Crafts, as in Bernard Maybeck, the Pasadena school, or the first efforts of Irving Gill; or to the highest domestic embodiment of the classical ideal – the Italian villa. The Italianate, with its Mediterranean roots seeming to somehow echo the region’s Hispanic history, climate and landscape, was the tradition to which the first grand mansions, public buildings and hotels in southern California adhered, like Charles Whittelsey’s Wentworth Hotel in Pasadena, the first great houses of Wallace Neff, and the extraordinary public work of Myron Hunt.

By the mid Teens, however, some, like the self-taught architects George Washington Smith and John Byers in their own first houses, had already begun to look to southern Spain as a source. Others were learning from the exotic mix of Spanish, Pueblo and Mexican that Fred Harvey’s architects – including Whittelsey himself – had employed for the tourist hotels along the path of the railroad west. Then, as the great home-building boom of the Twenties got under way, the campaigns of the California Landmarks Club to preserve the missions, and of Charles Lummis and others to promote a return to building in the fashion of early California through two great landmarks rising above Los Angeles and San Diego – the Southwest Museum and the Junipero Serra Memorial – began to take their effect. Missions were restored. Great country haciendas appeared, like Hunt’s for Kellogg in Pomona, or Neff’s for King Gillette in Calabasas. Tract homes with the same flavor – many on models by architects as sophisticated as Gill and Roy Kelley – quickly followed suit, using the same romantic echoes of Spain and old Mexico as the silent films of “Ramona” or the “Mark of Zorro”, and even the promotional talents of Mary Pickford herself, to sell them.

Much of this new work was boosted and informed by the appearance, in 1917, of a large illustrated publication by the young Austin Whittelsey, produced by New York’s Architectural Book Publishing Company, the leading supplier of source books of measured drawings of historic buildings, from the Georgian mansion to the Cape Cod saltbox, all of which it put forward as models for modern America’s emerging built landscape. Austin was to have followed the path of his father, drawing features among the landmarks of Germany, France and Italy that could be imitated in the American home. But wartime conditions limited his long journey to Spain, and there he found himself fascinated by Andalusian farmhouses, rural churches, little patio townhouses, small haciendas, and among them all the extraordinary interlacing of garden and dwelling. He scrupulously titled his work “the Minor Architecture of Southern Spain” . . . At one stroke Whittelsey had turned the eyes of the Book Company and its subscribers away from grandiose and over-decorated models toward the persistent simple patterns of the everyday dwelling.

By the time the Company produced the major published model book on Mexican domestic, Garrison and Rustay’s 1930 Mexican Houses, it had become inevitable to follow Whittesley’s lead, seeking out a Mexico marked by sturdy restraint and atmosphere rather than the sort of ornament and splendor Bertram Goodhue had introduced at the San Diego Exposition of 1915. Mexican Houses looked for the play of blank walls, patios and steps rather than the play of light upon turned pilasters. The authors carefully eschewed the “monumental and pretentious,” to locate the “organic character” and “simple variety” of detail in the vernacular – looking for everything “good that was not grand” in the colonial Mexican tradition. Theirs is the casual and unorthodox spirit – irregular, growing over time, spilling out across the landscape, and immensely varied — in which May’s house at La Habra was conceived and which makes his work so compelling.

These proved to be unexpectedly authentic and adaptable new sources for a native California style, in tune with open living and a forgiving climate. Richard Requa – whose work in Ojai began at the same time – soon followed suit, with a series of articles in the San Diego Union, on examples from early California, and – as John Byers had done a little earlier – went himself to Andalusia in 1926 to study the sources first hand, and for the next decade both worked a wealth of variations upon them. The same spirited interest in the patterns of everyday buildings in the Spanish world took George Washington Smith and Lutah Maria Riggs to central Mexico in 1920 and 1921. From their sketches and studies came the best examples of Santa Barbara’s ‘colonial style’ enforced in the wake of the 1925 earthquake. More immediately, they drew from their sketches in Mexico ideas for the model small houses in Edward Libbey’s Ojai ‘Arbolada’ – an entire subdivision of small lots just to the north of the site on which Ford’s house was built, organized on the wandering plan of a working hacienda. There Riggs and Smith found a perfect balance between simplicity and ornament, moving toward an informal and restrained way of crafting homes on an open plan.

By the 1920s architects like Carleton Winslow were turning from distant Mexican idioms to their more local variants, studying and then borrowing from the architectural language they found among the remains of early California homes. As another great exponent of the state’s Spanish traditions, the architect Roland Coate, put it, “the new type of early California house” is “a flexible house; it lends itself to many sites; it combines the formal with the informal,” and, with its patios and courtyards, speaks to “a heritage here of out-door living” that “seems to have come down to us from the early freedom of life when this was a Spanish province…the ready access of the out-ofdoors which irresistibly conveys itself to the whole of a house, and seems to enlarge the life of the inmates.” And, like Paul Williams’ house for Ford, May’s first large-scale hacienda beautifully bears out Coate’s belief that the “new California type” worked “best where it has a chance to spread.”

The result was a decisive movement in favor of a ‘native’ domestic language weaving together early California architecture, its sources in Mexico and Andalusia, and such original and personal variations on the type as Neff’s famous circular stairs and Moorish picture windows. There was nothing generic about this hybrid. As the two examples Jocelyn Gibbs discusses show, the range of treatment was rich and varied. Paul Williams’ Ford house dates from the subtlest and most sophisticated high point of the hacienda late in the Twenties and shows all the restraint, respect for repeated patterns, and regard for proportion of the classically trained professional. Cliff May’s La Habra is entirely different. It exemplifies the scrupulous attention to conveying a rough and ready manner through which May turned back to the casual plan and apparently accidental patterns of the old California ranchos in his brilliant effort to revive their traditions six years later. Nothing is more striking than the differences between these two works. But there is an essential unity to them to ‘the California house’. It may have blossomed quite suddenly, but had in fact grown out of a long evolving inquiry with many different trajectories, from the analysis of Monterey to the study of the Moorish, and each architect came to it with a distinctive sensibility. As a critic noted in 1928, “steadily growing from year to year there has been developing an architectural entity, . . . not composed of just those building traditions that were inherited from the days of the Mission” nor of copies from Spain and Mexico, but of something remarkably coherent and so true to its place that it is now “impossible to separate what is native from what is borrowed.”

With their informal plans and their interlacing of interiors with the out of doors, we can look back on these ‘Californians’ now and see how natural was the line that led from the ‘Spanish colonial’ houses of the Twenties to the famous low-slung, open plan California houses that emerged at mid century.

It may have blossomed quite suddenly, but had in fact grown out of a long evolving inquiry with many different trajectories, from the analysis of Monterey to the study of the Moorish, and each architect came to it with a distinctive sensibility. As a critic noted in 1928, “steadily growing from year to year there has been developing an architectural entity, . . . not composed of just those building traditions that were inherited from the days of the Mission” nor of copies from Spain and Mexico, but of something remarkably coherent and so true to its place that it is now “impossible to separate what is native from what is borrowed.” With their informal plans and their interlacing of interiors with the out of doors, we can look back on these ‘Californians’ now and see how natural was the line that led from the ‘Spanish colonial’ houses of the Twenties to the famous low-slung, open plan California houses that emerged at mid century.

By 1923 a writer in the Architectural Forum could already say that, with its adoption of early Californian, Mexican and Spanish models, “California may be said to have ‘found itself’ architecturally, a thing not yet true of the East. ” Indeed, as any film travelogue of the Twenties will show you, they gave to a land full of displaced health-seekers and hopeful migrants exactly that distinctive, and very American, sense of belonging for which Joy Wheeler Dow had called twenty years before: an entirely progressive way of dwelling in a land and within its histories that not only laid the groundwork for the famous Modern work to come, but must surely now be recognized not as a type of slavish historicism but in all its variety and genius as a body of full-fledged original masterworks worthy of meticulous preservation in their own right.