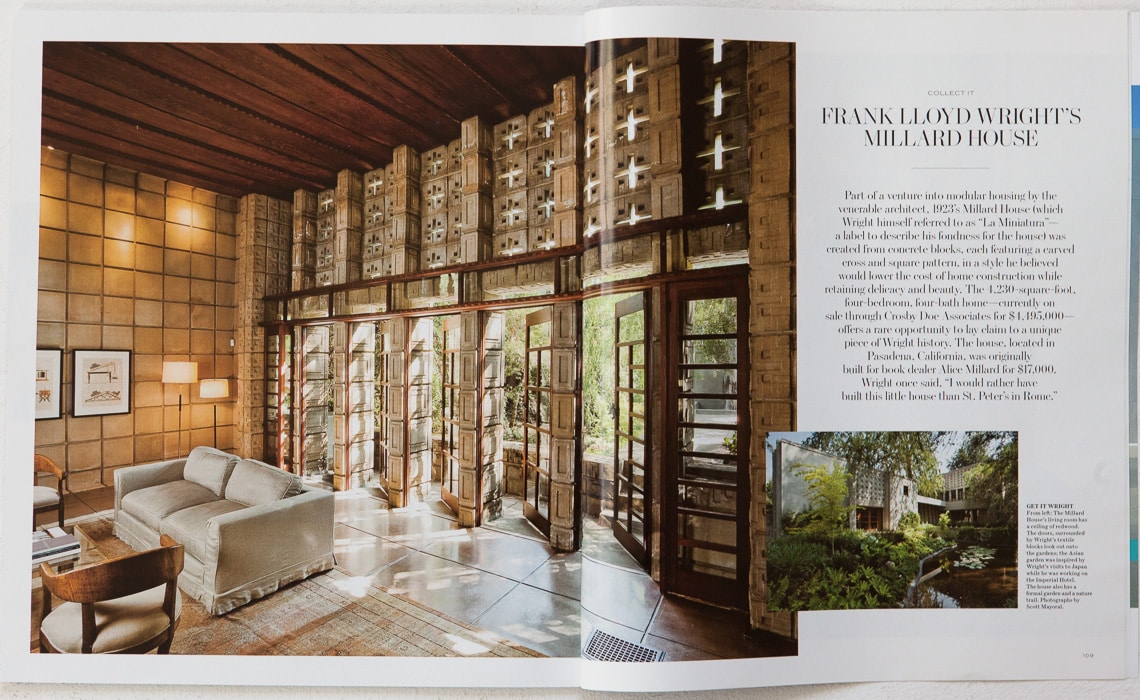 Frank Lloyd Wright’s Millard House – Part of a venture into modular housing by the venerable architect, 1923’s Millard House (which Wright himself referred to as “La Miniatura” – a label to describe his fondness for the house) was created from concrete blocks, each featuring a carved cross and square pattern, in a style he believed would lower the cost of home construction while retaining delicacy and beauty.
The 4,230-square-foot, sale through Crosby Doe Associates for $4,495,000 – offers a rare opportunity to lay claim to a unique piece of Wright history. The house, located in Pasadena, California was originally built for book dealer Alice Millard for $17,000. Wright once said, “I would rather have built this little house than St. Peter’s in Rome”. Architectural Digest – April 2013 ‘Estates’ section 3 bedrooms 3 baths 1,650 sq. ft. $799,000 Los Angeles Pedigree: West Coast modernist Craig Ellwood completed this striking dwelling in 1949. A precursor to the architect’s famous Case Study houses, the compact structure was erected using then-cutting-edge modular construction methods. Steel-framed ribbon windows afford little privacy but deliver views of the surrounding hillside.
Property Values: The tiny parcel, measuring just one fifth of an acre, is located on a prominent Bel Air street, offering entrée to the exclusive neighborhood at a relatively low price. Talking Point: Plans for the home appeared in the October 1949 issue of the influential magazine Arts & Architecture, making the Ellwood’s first published work. Contact: Crosby Doe Associates, 301-275-2222